TONY: We’ve grown our team substantially at Weploy, from three to 25, and culture is starting to become a big topic. As the senior leadership team, we are trying to figure out what kind of culture we want. Can we influence that? Or is that organic? I’d love to know, what does culture mean to you?

MARISSA: To me, culture is about things that are intangible. Things that are related to your own personal values. For me, everything needs to be values-aligned from the start. When I think of one of the biggest mistakes founders make is that they fear talking about culture as being this ‘HR thing’ because – once you get HR into the mix – it’s uncool. It’s not fun and we aren’t a startup anymore. But when you do that and wait too long and you’ve built this toxic culture, then you are trying to go back and fix it.

For me, it’s not about the ping pong tables. Coming from Silicon Valley, you always see that with foosball tables and nap rooms. Those are just perks. They are benefits that companies use to make them seem cool. When I was at Slack, when we made the careers page, I said, let’s not focus on perks, let’s focus on the values and what we are trying to accomplish and speak to that.

TONY: Michael, how about yourself?

MICHAEL: I totally agree with that. The fundamentals create a great culture and those values are essential. What you said before about the questions you are asking yourself Tony – What is our culture? And how do we build a great culture? I think that’s how you do it. You identify what it is you want to experience, what kind of culture you want to have, and figure it out. I don’t think there’s a formula that you can translate from one company to another. What works for us is different from what works for you.

I think there are some fundamentals that are key – i.e. values – and being really clear about what they are and ensuring people know what they are through doing what you do. I think these are what translate to and result in a great culture, which might involve dogs and ping pong tables in the office. It doesn’t start with that. You have got to build the foundation first. It’s not sexy and cool to talk about values but it’s essential if you actually want to build a culture that is sustainable.

TONY: David, how about yourself?

Regardless of what’s most important to each person individually, they can define what it’s like to be within this collective experience and company. If you can get people from different walks of life to have uniformity in that vision, and what it feels like, that’s where you start to establish a solid culture.

MICHAEL: Culture is going to happen. You have a culture. Whether it’s the one you want is the question. You don’t build culture – yes, by design, you should build the culture you want – but the fact is there is already a culture. That’s the outcome. What people are feeling is the outcome of processes, systems and experiences, ideally, those that you consciously create with that outcome in mind.

Working back from the culture you have, everyone is going to experience the culture in their own way. Ideally, it’s a relatively similar experience and one that aligns with what you are trying to create. That’s when the design over default comes into it.  So if this is what people are collectively experiencing then, is it what we want them to be experiencing? Is it working? If not, then go back and figure out what experiences are necessary to curate this culture to be felt.

TONY: What do you mean by experiences?

MICHAEL: I think there are things that can happen quite deliberately that people probably wouldn’t normally think about or acknowledge, for example, communication. Not just that you communicate but the tone, the frequency, the consistency, and the language. Just being really clear about the rituals, the routines, the processes and having consistency across those to enable, again, a consistent experience or feeling. So a lot of what happens normally or quite naturally can be constructed or manipulated in a way to achieve a slightly different experience – if it’s not happening in the way you want it to.

DAVID: That ties back, Tony, to why you are doing it. What’s the core purpose? The core purpose comes back to the business purpose. So, how do you know if the collective experience is working, not working, or in the direction you want it to be?

Well, if your results are extremely poor, if the company is struggling, if people are disengaged, if they are not producing their KPIs, their KRAs, and you get the sense that there is a bit of lethargy in the organisation, usually that’s where the tweaks come from. That’s where you may say, symbolically, we are putting in a lot of effort to ‘create’ a strong culture but it’s just not working because people aren’t working.

TONY: Is your measure of a good culture or a bad culture whether people are performing David? Or are there other ways of measuring that?

TONY: Marissa and Michael, you have both worked in hyper-growth startups at an early stage. They’ve all been successful – Facebook, Skype, Slack, and Vinomofo – how have you seen culture play a part in that?

MARISSA: Yes, I think culture can play a really good part in being able to scale successfully. It really does come down to the people. It kind of goes back to that team mentality. We talk about tenacity and grit a lot at Weploy. That’s what we look for and is what’s super important in that startup phase.

Maybe not so much when you are accomplished but I think that’s a key factor in some of the successful startups I have worked for. People are aligned with the end strategic goal and how they are going to get there and there’s no hierarchy of titles or responsibilities. Literally, we are all the same.

MICHAEL: I think it’s essential. Culture for Vinomofo has been the differentiating factor in our success. That was defined really early by our two co-founders, who were really clear about how we wanted to operate as a business, what we stood for, and how we wanted to work. That was very much an extension of their own personalities. Not only how they run the business but how they wanted to work with people within it and also the businesses we work with.

The challenge was then taking what was implicitly known by working from osmosis in a very small team, then, as the company grew, to go, ‘What is the essence of the business and that our customers love?’ and trying to protect and nurture that as we scaled. That’s when it became really important to identify what it was and to look after it.

TONY: David, you joined a business that’s quite traditional and has been around for a number of years. It’s gone through quite a cultural transformation, how has that helped your business?

DAVID: I think over the last number of years, in a couple of different industries and jobs, I have stepped into where things have gone wrong. Not necessarily results-wise, but culturally, there’s been a series of problems. When you step into an organisation and things aren’t in place, the first year or two is about putting the foundations in place; re-engaging with people, establishing social and cultural committees, honour boards, better rewards, and recognition. I have seen it through the lens of when a business is built without that in place and it’s left organically to chance.

The Grand Prix is filled with brilliant people and there are good aspects. It’s not a black and white thing. Because culture starts to get away from the company doesn’t mean everybody is broken. It just means when things get broken, it doesn’t have that resilience. That’s when relationships can become fragmented and people can become confused about what’s expected of them and make up their own rules.

Coming into the business, it’s always been about engaging emerging leaders, putting things in place, and creating some momentum from a business that has pre-existed for decades. I think, for me, the biggest challenge is not getting through those first few stages, which are building, but it’s about finding that long-term sustainability six or seven years into a program where a business can ride out almost any challenge. You can lose your CEO. You can lose a number of executive team members. Your financial performance can really dip. But your culture keeps people really tied and able to bed down and work their way through challenges.

I don’t think I have ever worked in an organisation that has worked their way through that from beginning to end. It’s always evolving and tinkering and I suppose that’s the goal for me, to get to the other end, where you can really ride out pretty much any challenge because those cultural norms are in place.

Learn more about how Weploy works with clients and candidates and why we’re the part of the new school of recruitment.

See how Weploy works for yourself
Get Started
Tagged:
Ask the Experts Tips NewSchoolOfRecruitment
Related Articles

Ask the Experts, Tips, NewSchoolOfRecruitment
Episode 1 - The Purpose of Work

TONY: Can you tell us a bit about yourself and your work Ruby?

RUBY: I had years and years of corporate experience and I got to that purpose point, where I was like – why am I doing this? Why am I recruiting these roles constantly for businesses that I only kind of believe in? 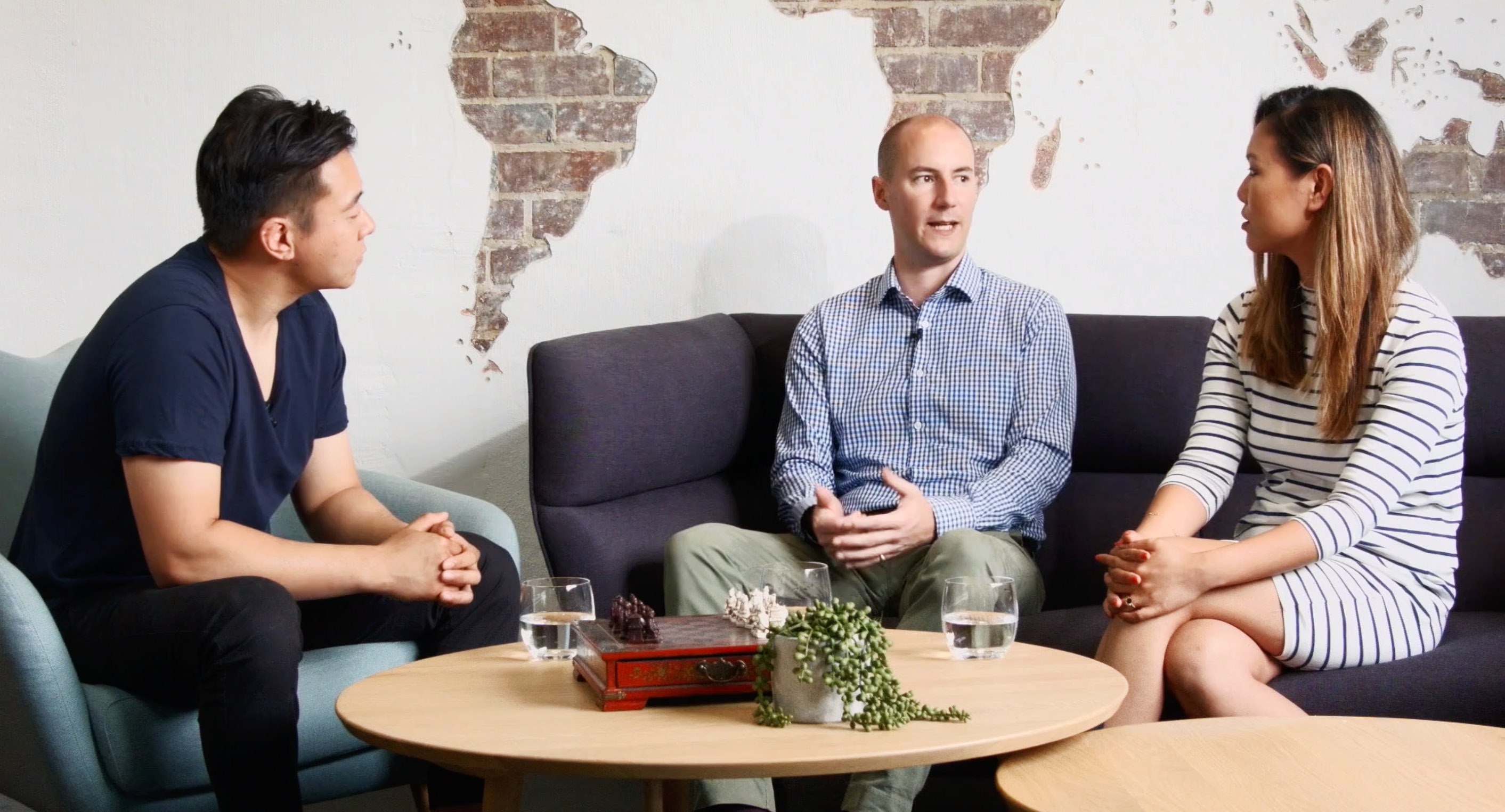 TONY: Can you tell us a bit about yourself, your employer branding business Digital Affair, and how you got where you are today Tim?

TIM: Part of it is timing. Employer branding has become extremely popular and organisations have started to understand how important it is, both to engage their people but also to connect with customers. It’s not just isolated to the employer space. Employer branding can have a big impact on consumer brands too.